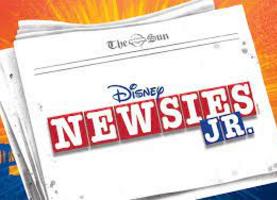 Disney's NEWSIES JR. Description: Disney's Newsies JR. is a 60-minute version of the 2012 Broadway musical, based on the 1992 film. Inspired by the rousing true story of newsboys in turn-of-the-century New York City, Newsies JR. features a Tony Award-winning score by Alan Menken and Jack Feldman and a book by Tony Award winner Harvey Fierstein. When powerful newspaper publishers raise prices at the newsboys' expense, the charismatic Jack Kelly rallies newsies from across the city to strike against the unfair conditions. Together, the newsies learn that they are stronger united and create a movement to fight for what's right. Including the now-classic songs "Carrying the Banner," "Seize the Day," and "Santa Fe," Newsies JR. is a timeless story full of spirit and heart

Auditions~ Auditions will take place on Wednesday, May 4th from 5-8pm. Audition Packet will be available April 1st and will be sent out to everyone registered to audition. Only a limited number of students will be accepted.

Ages~ This production will be our "Summer Intensive" for middle/high school students.

Rehearsals- Rehearsals will take place in the evenings on Wednesdays from May-June, and 3 nights a week in July, with performances on July 29th and 30th. There will be intensive rehearsals the week of July 25th-29th in the evening including 2 at our performance location, Carco Theatre in Renton

Cost~ The cost of this production will be $750. Students in our T.A.I.T. program will have the opportunity to assistant teach our spring production or summer camps in exchange for reduced tuition, The T.A.I.T. application will be available by April 1st and is open to students entering grades 9-12.